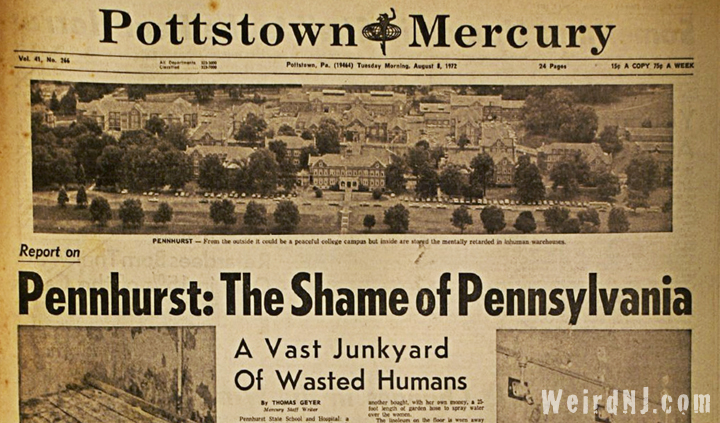 Some of you may have caught my recent Facebook post where I implored local haunt-enthusiasts to please skip Pennhurst Asylum’s haunted attraction.

Pennhurst lacks no evidence of its otherworldly activity. The weight of sadness that patrons experience can be overwhelming. Countless “ghost hunts” have taken place on the historical premises, documenting thousands of events. And long before the facility closed its original operations, this heartbreaking documentary was filmed:

In this article by the Inquirer, you can see a detailed account of just a fraction of the institution’s horrifying history. Not that long ago in our history, persons who were deemed “less than” were stowed in facilities like this. They were considered an embarrassment, a burden, and not fit for society. Parents were encouraged to place disabled children in homes where they would be appropriately cared for. However, that was rarely the case. Facilities were dramatically overcrowded, understaffed and what staff was present was poorly equipped to care for anyone, let alone medically complicated patients. Doctors routinely performed experiments. Patients could be restrained constantly.

Pennhurst and other “schools” and “homes” for disabled, criminally insane, mentally unfit, and the like, speckle the history books with an embarrassing history of mistreatment. Mental health is a waning taboo in 2019, but is still a touchy topic that requires sensitivity. The real issue at hand is that there is someone capitalizing on this mistreatment. I won’t sit here and be some ridiculous mouthpiece for reparations or some other penance. A preserved, respectful memorial to those who were mistreated and lost their lives would be well more than enough.

In the discussion the other week, it was mentioned that, despite astronomical profits topping over a million dollars a year, none of it was donated to further services for the disabled. When facilities like Pennhurst began to close due to understaffing, overcrowding, and general misuse, the burden was again placed on the families, with little support offered. My own family has benefited from Early Intervention and Intermediate Unit services, but it doesn’t truly offset the heavy responsibility of caring for a child with any type of disability. Since I worked from home, I was not eligible for any type of respite care – one would think that a mother who is solely responsible for a child 24/7 would be the first to qualify for a break, no? Apparently not. Childcare services require you to be below the poverty line. Daycare’s require one-on-one aides that you have to conjure up (good luck with that; we are still waiting 5 months later). Leaving your child with someone requires an inordinate amount of trust in someone to understand your barely-verbal child. Friends who’s children have meltdowns and outbursts require caretakers who have mountains of patience and who are equipped to handle these incidents. Institutionalizing my son would have absolutely never been an option for me, but I can certainly understand the societal pressure to do so.

Now, all of that said, if the current owners of the Pennhurst grounds were to donate at least a large portion of their profits to improving services for the type of patients Pennhurst once housed, I could stomach the profiting off this tragic era much better. It still wouldn’t sit completely right with me, but I would feel better knowing that perhaps the entire state of Pennsylvania’s special needs care system would fare much better, as a tribute to its tragic history.

NPR: Haunted House Has Painful Past as Asylum

Trigger warning on this article, but very well written piece by someone on the spectrum: PAranormal (and True) Crime